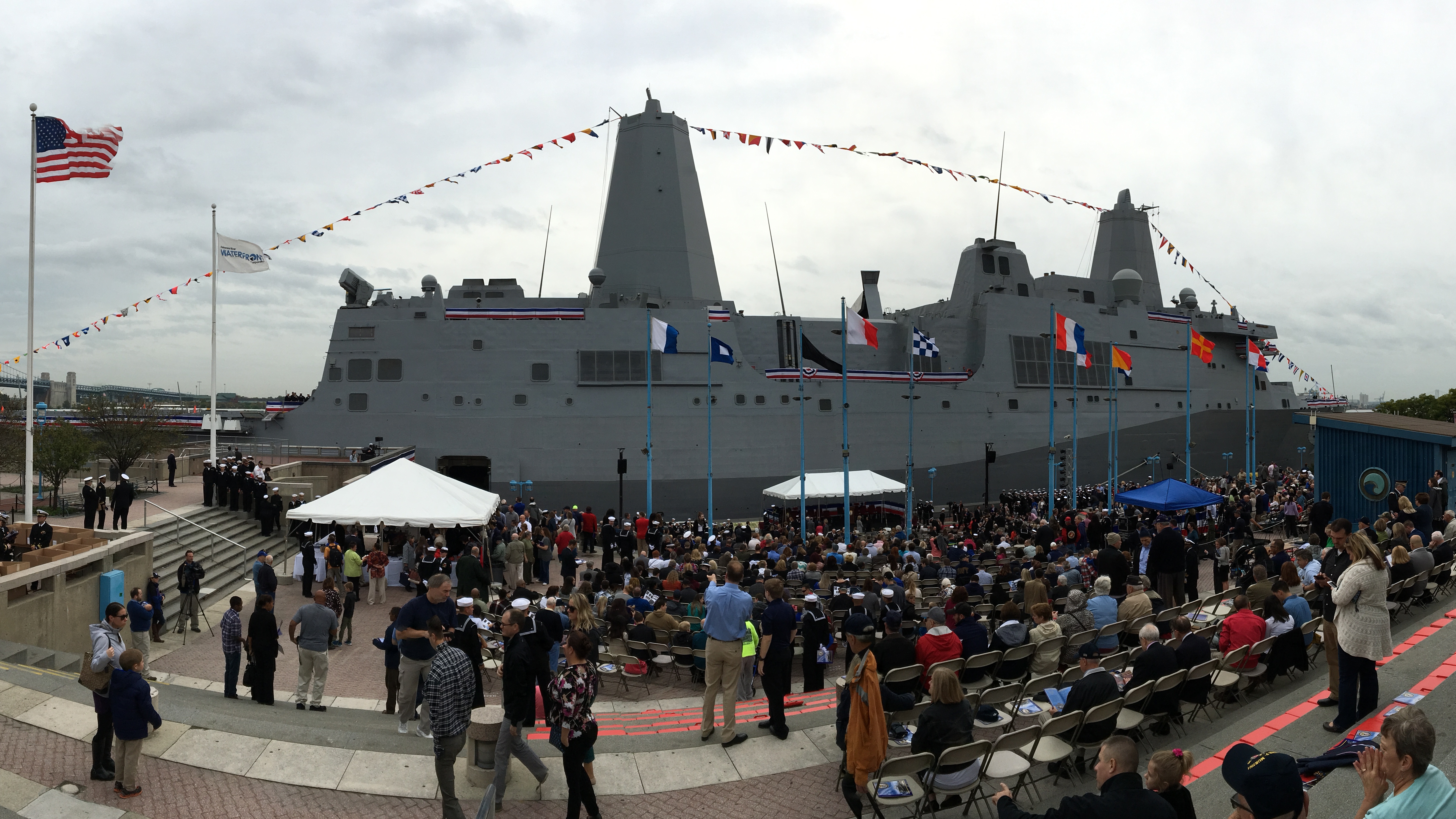 The commissioning of a Navy ship is a big deal. Philadelphia held its first commissioning ceremony more than two years ago, in March of 2014. That ship, the USS SOMERSET (LPD-25), was named in honor of the passengers of United Airlines Flight 93 that crashed near Shanksville, Pa., in Somerset County, during the 9/11 terrorist attacks.

Last month, the city was privileged once again when the Philadelphia Chapter of the Navy League brought the community together for the commissioning of the USS JOHN P. MURTHA (LPD-26).

“Being a Navy veteran myself, who started and ended my military career here in Philadelphia, I was honored when the Navy League approached me to see if Comcast would be involved,” Titus said. “Comcast is one of the few companies that not only talks about how important it is to support military and veteran initiatives but takes action; implementing programs to hire veterans and involving itself in key veteran community events.”

The commissioning was a week-long celebration. Titus was honored to ride on board the ship, joined by fellow Navy veteran Paul Houck, a Technical Operations supervisor out of Plymouth Meeting. As part of the sponsorship, Titus and Houck, along with members of the Comcast Veterans Network, enjoyed dinner aboard the ship featuring Philly favorite foods and a performance from the USO Show Troup, as well as a tour of the ship.

“It was an honor and thrill to be a part of this journey as I had not been aboard a ship since I served in the Navy from 1976-1980. The views from the Murtha reminded me of similar trips I took up the Cooper River when entering the port of Charleston, S.C., aboard the USS Sellers (DDG11) that I was stationed on,” said Houck. “Comcast’s commitment to hiring veterans is a commendable effort, and one that I work every day to help support.”

In addition to sponsoring the crew dinner, Comcast Freedom Region deployed its Wifi on Wheels van to Penn’s Landing, where the USS Murtha was docked, to help the ship’s crew stay connected and make the most of their time in Philadelphia. Additionally, during the week leading up to the commissioning, XFINITY Live! offered a 26% discount to members of the crew (in honor of the ship’s designation, LPD-26). “This was a total team effort,” said Eggert. “Cable Headquarters, Freedom Region and Spectacor – the whole Comcast family can be proud of the support we provided to the crew of the USS Murtha.”

During the Navy League Chairman’s Reception, Comcast’s Veterans Network was honored as one of the top four commissioning ceremony sponsors – alongside Wawa, Sheetz and Ingalls Shipbuilding. To receive this recognition in Philadelphia, which has one of the largest Navy alumni networks in the nation, was a huge honor, Titus added. The week culminated in the official commissioning ceremony, which featured guest speaker Nancy Pelosi, Minority Leader of the U.S. House of Representatives. Major figures across the state of Pennsylvania and Philadelphia, from the Governor on down, participated as well.

“It was heart-warming to see World War II Veterans, Korean War Veterans and Veterans from all services, showing their pride on this historic commissioning ceremony to honor not only a great Veteran and hero but a respected community leader as well,” Titus said.

The Honorable John P. Murtha was a retired US Marine Corps officer and served as a member of the Pennsylvania House from 1969 to 1974. In 1974, he was elected to Congress becoming the first Vietnam War veteran elected to the U.S. House of Representatives. He also served as chairman or ranking minority member of the House Appropriations, Defense Subcommittee from 1989 until his death in 2010.

Comcast announced today that it now offers the fastest internet speeds over WiFi across New Jersey, as it begins to introduce Gigabit service to customers in … END_OF_DOCUMENT_TOKEN_TO_BE_REPLACED

Comcast Business today announced it has established a partnership with Philadelphia-based organization REC Philly, in which Comcast Business has provided 25 … END_OF_DOCUMENT_TOKEN_TO_BE_REPLACED

Comcast is committed to supporting veterans and the broader military community – both inside the company and out. One example is our Veterans Network Employee … END_OF_DOCUMENT_TOKEN_TO_BE_REPLACED